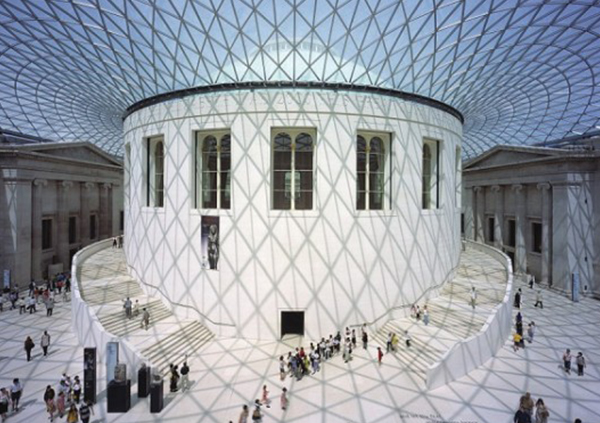 The British Museum (British Museum) is a museum of the city of London, UK. Its collections cover various fields of human knowledge, such as history, archeology, ethnography and art.

The museum was one of the first institutions of its kind in Europe. Custody more than seven million objects from all continents, many of which are stored for study and restoration, or stored for lack of space to display them. It also has the largest reading room of the British Library, a library that although now has its own headquarters, until 1973 also part of the museum, like the Natural History Museum, which moved to its own headquarters in the year 1963.

The section of Old Egypt is the most important in the world after the Egyptian Museum. Admission to the museum and many of the services offered, such as the read-room, are free and free, except for some temporary exhibitions.

The museum officially opened to the public on January 15, 1759, in the Montagu mansion, but when it outgrew began, en1852 and in the same location, the construction of a new neo-classical building, designed by Robert Smirke. The construction of the new museum, which has reached our days, ended in 1857 with the construction of the circular room study. In its main facade, in the fronton, he settled in 1852 a sculpture built by the British sculptor Richard Westmacott.

The Duveen room, which houses the collection of the Parthenon, was built in 1938 by architect John Russell Pope, but in the año1940 was damaged by a bomb in the bombings of World War II, rebuilt and opening again to the public in 1962.

One of the latest additions to the British Museum was opened in December 2000. It is the Great Court of Queen Elizabeth II. Located in the center of the museum, it is designed by the architect Norman Foster.

It occupies the site formerly occupied by the British Library, and moved to its new headquarters. The Great Court has become the largest covered square in Europe (90 x 70 meters). The atrium roof is made of glass and steel, and is composed of 1,656 pairs of crystals.

In the center of the Great Court it is located the reading room, which was formerly part of the British Library. The volumes of room were consulted by many great personalities throughout its history, as Karl Marx, Oscar Wilde, Mohandas Gandhi, Rudyard Kipling, George Bernard Shaw, Vladimir Lenin or H. G. Wells. The reading room is open to anyone who wants it.

Currently it consists of ten apartments and houses part of the British Library.

Both in the department of prehistoric and Roman-British antiquities and the antique medieval works of art ranging from prehistoric Europe to the present day, through the Middle Ages and the Renaissance they are displayed.

The department of coins and medals covers all the cultures and periods, and in it Greek, Roman and Eastern pieces, as well as the Royal Collection presented to the Museum by Jorge IV are.

Egyptian antiquities department, which houses one of the largest collections in the world, is especially known for housing the Rosetta Stone and its many papyri, mummies and sarcophagi.

The department of ethnography custody objects from indigenous peoples around the world, especially the collection compiled by captain James Cook in the eighteenth century. These objects are exposed at the Museum of Mankind, located in Burlington Gardens.

The department of Greek and Roman antiquities holds many famous works of art. These may include the Roman glass vessel known as Glass Portland, the first century, the Warren Cup, with scenes of homosexual sex, the frieze of the temple of Apollo Bassae (Greece), losMármoles of Elgin and sculptures of the Mausoleum of Halicarnassus , in Turkey.

Oriental antiquities department has collections of Islamic art and archeology and oriental, especially Chinese ceramics and sculpture hindú.El department of prints and drawings contains an important collection of European graphic art spanning from the end of the Middle Ages to the present day .

The Department of Western Asian antiques shows both Mesopotamian and related to this area dating back since 5000 works. C. until the arrival of Islam in the seventh century AD. The collection includes abundant material from the excavations that the English archaeologist Leonard Woolley took place in the ancient city of Ur.