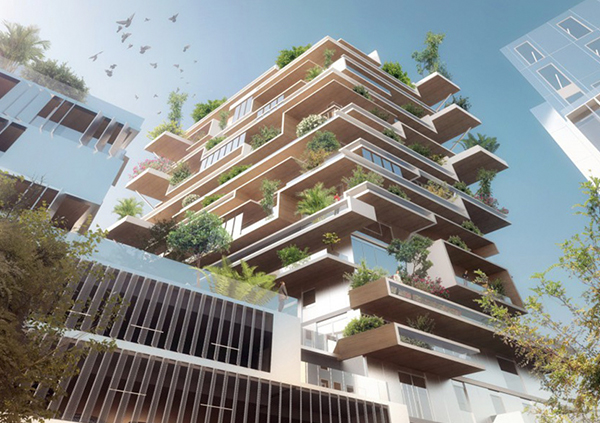 The city of Bordeaux in France will host the tower tallest wooden frame in the world. Hypérion called, the building laminated wood CLT, will be built by Eiffage, Woodeum, 3F group and the architects Jean-Paul Viguier & Associés.

In March 2016, the mayor of Bordeaux announced that there will be but two wooden towers of 50 meters for this project: HYPERION Eiffage and Kaufman & Broad Silva. The two towers Silva and Hypérion be located on each side of the tramway line.

The Hypérion tower will have 82 apartments, offices and commercial areas and reach a height of 57 meters, with 18 levels and a total area of ​​17,000 sqm (of which 4,000 m² of offices and 500 sqm of shops) in the heart of Bordeaux . The budget for this project is 51 million euros.

Wood, the main material of this tower will occupy a large area of ​​the building, except for the facade in order to protect the material from the weather. Parking lots will meet the first level and will be invisible because they are part of the construction.

Environmentally, Hypérion inaugurate a new generation of buildings with low carbon footprint. In addition, the lightness and rigidity of the laminated wood CLT, combined with the strength of glulam and LVL, allow to meet the challenge of height.

Wooden tower - For the environment

CLT contralaminada recyclable timber, does the sun rise carbon instead of emitting. Thus, this material allows the tower to reduce carbon emissions and combat global warming. The tower Hypérion serve as a reference for the label BBCA (buildings low carbon) which aims to divide by 2 the carbon footprint of new buildings.

Thanks to the 1400 m3 of solid wood (CLT, LVL, and glued wood), the tower can almacener 1000 tons of CO2, equivalent to the amount of carbon emissions on average energy consumption of such building in 9 years.

This project will demonstrate the capabilities of wood to reach great heights as it will be used as supporting structure, although the core (stairs and elevators) will consist of concrete to ensure stability.

Hyperion - Speed ​​of construction and comfort of homes

Regarding vivendas they disfutarán large volumes and beautiful views. They will run to the outside by large balconies and hanging gardens. The people will benefit from the qualities of thermal insulation of wood and comfort of a natural home. When completed, this project, with its sustainable design, it reconciles ecology and quality of life.

The construction of the tower Hypérion should start in September 2017 and finished in January 2020 according to current planning.

France and regains its delay in this type of construction but in the meantime, countries like Austria, at the forefront of wooden buildings, continue to advance. Thus, the record set by the two towers should not last long even at European level, Hypérion and Silva dethrone the 'Treet' 14-story tower, located in Bergen, Norway.

In Quebec, a construction reached 13 floors and in Melbourne, a wooden tower 10-storey CLT contralaminada was built. Even more spectacular is the project of the tower in Vienna Hoho 24 floors and 84 meters high. This tower, unlike Hypérion not have homes but hotels and shops. In Vienna, the tower Bahnorama delivered in 2010, measures 65 meters, is higher than the French towers but there is a tower housing or offices but an observatory, then the challenge is not the same.
Traductor de Google para empresas:Google Translator ToolkitTraductor de sitios webGlobal Market Finder